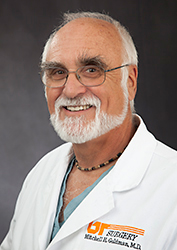 Dr. Paul J. Hauptman, Dean of the University of Tennessee Graduate School of Medicine, announced the Mitchell H Goldman Endowed Chair for the Department of Surgery. Dr. Michael Freeman, Professor of Surgery, has been named as the inaugural holder of the Endowed Chair.

This important step forward is due in part to the efforts of Dr. Goldman, former Surgery Chairman; Dr. Sperry Nelson, Professor Emeritus; and the many donors who supported the initiative. Through endowment funding, the Department will be able to better enhance the training environment for residents, fellows, post graduate trainees, students, faculty, and staff; support patient care of the highest quality and safety; and encourage innovation and research in surgery.

Dr. Goldman, for whom the endowment is named for, exemplifies a surgeon dedicated to the mission of excellence in healing, education and discovery. His tenure as vascular and transplant surgeon, and professor and chairman, made an impact on the Graduate School of Medicine, The University of Tennessee Medical Center, and both regional and national academic surgery. He arrived at the UTGSM in 1984 and assisted Dr. Kimball Maull, his predecessor, in re-building the Department of Surgery, including a kidney transplant program and a vascular surgery training program. He performed Knoxville’s first kidney transplant at the medical center in 1985, and served as Program Director to the General Surgery Residency (1998-2010) and the Vascular Surgery Fellowship (1993-2002). He also coordinated medical student education and created a program known as Medical Explorations to inspire and mentor high school and college students interested in careers in medicine. Dr. Goldman became Chairman of Surgery in 1998 and served in that capacity until his retirement in 2015. As a reflection of his commitment to research, Dr. Goldman published almost 200 papers, authored several book chapters, and has been a member of editorial boards for multiple journals (including the Journal of Vascular Surgery, the Journal of Heart and Lung Transplantation, and the Annals of Vascular Surgery). He received several awards including Surgery’s Faculty Teaching Award in 1986 and the GSM Spirit Award in 2004, and in 2017 he was recognized for a Lifetime of Excellence by the Southern Association for Vascular Surgeons.

"It's a humbling honor for me to be recognized this way by faculty, residents, student and friends,” Dr. Goldman said. “It is an even greater tribute that Mike Freeman, a colleague, friend and leader in clinical care, education and research is the first to be named as Endowed Chair."

He added, "I would also like to recognize my family who has taken this journey with me and Dr. Nelson for his tireless work on behalf of the endowment."

After serving as Interim Chairman, Dr. Freeman was named Chair of Surgery in January. Dr. Freeman said, "The creation of the Mitchell H Goldman Endowed Chair will be of great benefit to the Department of Surgery as we continue Dr. Goldman's lifelong efforts to advance the mission of excellence in clinical care, discovery, and training the next generation of surgeons. For me personally, it is an immense honor to be named the first Chairman with Dr. Goldman’s name attached to the position. He has been a great mentor, friend, and stalwart supporter of the GSM."