The Department of Pathology 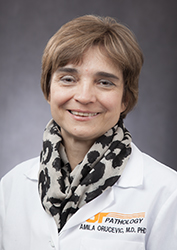 Dr. Orucevic's research is focused on the development of practical statistical models designed to predict prognosis of patients with breast cancer that can be used in the therapeutic decision making process. Working with Dr. Heidel, she is developing calculators that can predict breast cancer genomic test results, such as Oncotype DX and Mammaprint, without performing the tests themselves. These tests are expensive (~$4,000) and are not affordable for the majority of patients worldwide. They are utilized in ~30% of eligible breast cancer patients in the USA but play an important role as "precision medicine."

Her recently published calculator for prediction of Oncotype DX test results is widely used. The research paper describing the calculator was the most downloaded publication for the "Breast Cancer Research and Treatment" journal in 2017.

Cochrane K, Bell JL, Heidel RE, Orucevic A.
Adenosquamous carcinoma of the breast, an uncommon diagnosis with poor prognosis-Lessons learned from a 12-year analysis of the National Cancer Database. The Breast Journal. 2021 Feb;27(2):165-169. Epub 2021 Jan 22.

Scheiderer AN, Orucevic A. Positive antimitochondrial antibodies in patients with no histologic evidence of primary biliary cholangitis on liver biopsy: A rare scenario observed in a series of five patients. Presented at College of American Pathologists Annual Meeting; 2019 Sep 21-25; Orlando, FL.

Orucevic A. The predictive and prognostic multigene breast cancer assays used in the clinical practice in the United States: Analysis of the National Cancer Data Base. Presented at 2nd World Congress on Breast Cancer (Invited Lecture); 2016 Sep 19-21; Phoenix, AZ.

Orucevic A. What can be learned from the "big data" analysis from the National Cancer Data Base. Presented at Tennessee Oncology Data Analysts Association (TODAA) (Invited Lecture); 2016 Sep 15-16; Knoxville, TN.

The Department of Pathology