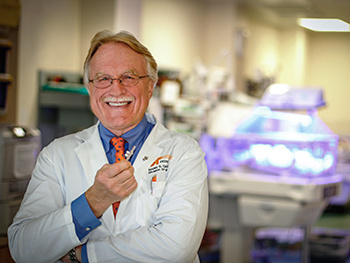 Mark Gaylord, MD, Professor and Director of Neonatology, and Vichien Lorch, MD, Neonatology Professor Emeritus, are developing technology that will stimulate babies with sleep apnea when they stop breathing. This is part of the physicians' vision of creating a wireless Neonatal Intensive Care Unit. The doctors believe that creating a solution for apnea could be the first step toward putting it all together.

In premature babies, especially those born before 35 weeks, the part of the brain that controls breathing has not developed yet. Generally, these babies have periods where their breathing slows or stops, and they need stimulation to start again.

"Apnea of prematurity has always been one of our biggest challenges, and it’s one of the most common reasons babies stay in the hospital,” said Dr. Gaylord.

Currently, premature babies are attached to monitors that sense when breathing stops. After 20 seconds, an alarm sounds, and a nurse can then gently rub or stimulate the baby to start breathing again.

Since very premature babies can stop breathing as many as 15-20 times an hour, this requires nurses to spend a lot of time monitoring babies and helping them breathe. It also increases the number of alarms going off in the nursery, which can cause alarm fatigue, a condition in which people in the nursery stop hearing the alarms.

“We wanted to find out if we could automatically stimulate the baby to breathe, without setting off an alarm, and do it all wirelessly,” said Dr. Lorch.

This led to a unique partnership between The University of Tennessee Medical Center and the Department of Electrical Engineering and Computer Science at UT Knoxville. This partnership could lead to a huge change in nursery technology for the hospital’s smallest patients.

Last year, Dr. Gaylord and Dr. Lorch approached the university’s Biomedical Engineering Department with a request to help them create a wireless nursery for preemies, starting with a system to enable babies with apnea to breathe better.

“We had the idea, but we didn’t have the technical knowledge to make it happen. So we approached the university and asked if they would partner with us on the project,” said Dr. Lorch.

Syed Islam, PhD, a professor in Electrical Engineering and Computer Science, has been working with the physicians to develop the prototype.

“We are creating a smart cannula, or breathing tube, to detect changes in breathing,” said Dr. Islam. “When there is no breath for 10 seconds, the cannula’s temperature drops, wirelessly alerting a transmitter to vibrate, and stimulating the baby to breathe.”

The main focus now is reducing the size of the chip and the battery so that they fit inside the breathing tube. Currently, the medical center is one of only a handful of institutes researching wireless nurseries. In six months the team hopes to begin testing and in a year to begin manufacturing, if they can get the right kind of partnerships and approvals.