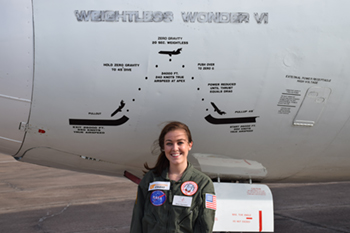 With the help and support of UT Graduate School of Medicine Surgery faculty, a UT College of Medicine student participated in research that combines her passions for surgery and space flight, research that will hopefully make the possibility of surgery in space a reality.

Shea Harrison, a third-year medical student, has been interested in space travel since she was a little girl. In high school, she participated in Medical Explorations and developed an interest in surgery while also following what was happening in aerospace medicine. She hoped she could somehow combine her interests in both fields.

"I've considered aerospace medicine for a long time," Harrison said. "The flight surgeons at NASA are allÃÂ aerospace medicine physicians who have really neat roles in supporting astronauts. But I love theÃÂ operating room too much, and flightÃÂ surgeons, despiteÃÂ their title, do not operate. For now, my plan is to train in surgery and hopefully one day find a way to be involved in space flight in some way."

While in medical school, Harrison discovered a research project led by George Pantalos, PhD, a professor of surgery and bioengineering at the University of Louisville, that may have opened the door to her future in space. Harrison says that Dr. Pantalos's goal is to find a way to perform surgery in space, where microgravity makes surgery problematic. Without gravity, it's difficult to maintain a sterile field and keep the surgical site contained. She says people have been working to solve these problems for a long time.

"Apollo 17 in 1972 was the last time man traveled into space beyond low earth orbit. For the past 15 years, we've had men on the international space station, which orbits about 250 miles above the earth. The people at NASA are working on plans for a number of manned missions that would take men much farther from the earth, including an asteroid and Mars. If a trauma or other surgical emergency happened on the international space station, the crew member could be home in 4 hours. Mars is 140 million miles from Earth and a trip home would take over a year, making an emergency return impossible. That's where the Astro Surgery project comes in," she said.

Dr. Pantalos designed an aqueous immersion surgical system, an airtight and watertight clear dome placed over the surgical site with surgical ports and filled with continuously recirculating saline solution. The idea is to control bleeding, contain fluids that could be harmful to the crew, and keep the surgical site sterile.

For the project, Harrison went to Johnson Space Center in Houston, Texas, for a week during her surgery rotation in Knoxville. She says the faculty in Knoxville helped her finish all of her required surgical rotations so that she could spend the week in Houston. "They were extremely supportive of my research and helped get the trip approved. I am really grateful," she said.

While in Houston, she attended an international symposium on "Surgical Capabilities for Exploration and Colonization Space Flight" where people working on aspects of surgical capabilities for spaceflight gathered in Houston at the National Space Biomedical Research Institute to collaborate. After that conference, she worked on getting the experiments ready to fly on several parabolic flights.

Although Harrison didn't get to go on a simulated flight, she says the Astro Surgery flights she helped prepare went really well, and the team gathered a lot of good data at both zero-gravity and lunar-gravity.ÃÂ In 2017, the technology will be tested in space on the Virgin Galactic SpaceShipTwo, which will allow the experiment to spend a longer time at zero-gravity. The coming year will revolve around preparing for the launch.